Before Der Nachtmahr immerses us in a party scene dynamic, complete with strobe lights, aggressive, blaring techno and an abundance of interchangeable teens running around virtually nude, a title card warns us of potential seizures from viewing and recommends cranking the volume. The idea is to give us the disorienting feeling of being at an underground rave and experimenting with drugs while projecting the sense of alienation that Tina (Carolyn Genzkow), our meek protagonist, quietly experiences.

Even in these early scenes, when her friends surround her discussing generic high school nonsense, there’s a sense of discomfort on her part. When someone pulls up an Internet video of someone being hit by a car while squatting in the street, everyone laughs and comments about the extreme nature of such a find, save Tina, who seems disturbed by the image, as do we based on its juxtaposition with such a distressing, loud, almost insidious, party environment. Even though nothing is outwardly stated to reiterate this, there’s a dehumanizing feeling about the world Akiz (real name Achim Bornhak) has created, which is what makes the instigator of conflict — Tina being hit by a speeding car while taking a piss (incidentally, in a manner that aesthetically mirrors the Internet video her “friends” were giggling about) — particularly disturbing.

Der Nachtmahr, Bornhak’s stylistic departure from his previous works, which were fairly standard structurally and visually, takes this opportunity to embrace the fantastical and oblique. Though Tina wakes up shortly after this accident, suggesting that the accident was just a dream influenced by the video her friends showed her, a small, trollish creature pops up in her home, initially hiding in the shadows, rummaging through the fridge, before showing up in her bedroom and developing an attachment to Tina. Initially, since others can’t see it and assume Tina is having some sort of mental breakdown, there’s an assumption of delusion that’s exacerbated by psychosomatic symptoms that manifest whenever the troll injures itself (when it licks a razor, Tina’s mouth begins to bleed).

Since Bornhak’s style is quite oft contradictory — he juxtaposes party scenes with languid cinematography and often lingers on our protagonist and the creature for extended periods with minimal movement — there’s a distressing, anxiety-inducing dynamic to how this unfolds. He’s also unclear about what’s going on exactly, allowing the audience to speculate about potential date rape pregnancy metaphors, near-death ideation, nightmares, purgatory and even the primary narrative assertion of mental illness. Unfortunately, Der Nachtmahr feels compelled to partially explain itself towards the end with a classroom scene (with Sonic Youth’s Kim Gordon playing the teacher), wherein Tina acknowledges that this isn’t necessarily about birth or death; it’s more about lack of control. But this still leaves enough question marks for the abstract nature of the narrative to function on the strength of its initial appeal.

During the climactic scenes, when Tina’s unconventional, symbiotic relationship with her monstrous mirror-self is threatened by those looking to harm to beast (and in turn, her), the real themes start to shine through. And while approval, social validation and the sort of repression that stems from trying to fit in are certainly valid themes for a trippy variation on the teen coming-of-age paradigm, they come off as a tad tepid and shallow considering the fascinating, stylized tapestry that precedes. Fortunately, Bornhak loops the story into itself like an ouroboros, leaving Der Nachtmahr, at least in part, open to interpretation.

It’s this vagueness and otherworldly peculiarity, mixed with the German director’s knack for capturing the horror and lack of humanity in conventional social situations, that ultimately gives this oddity of a film its power. Regardless of his need to spell things out a little too clearly, the experience of viewing this strange little psychological horror is quite singular. 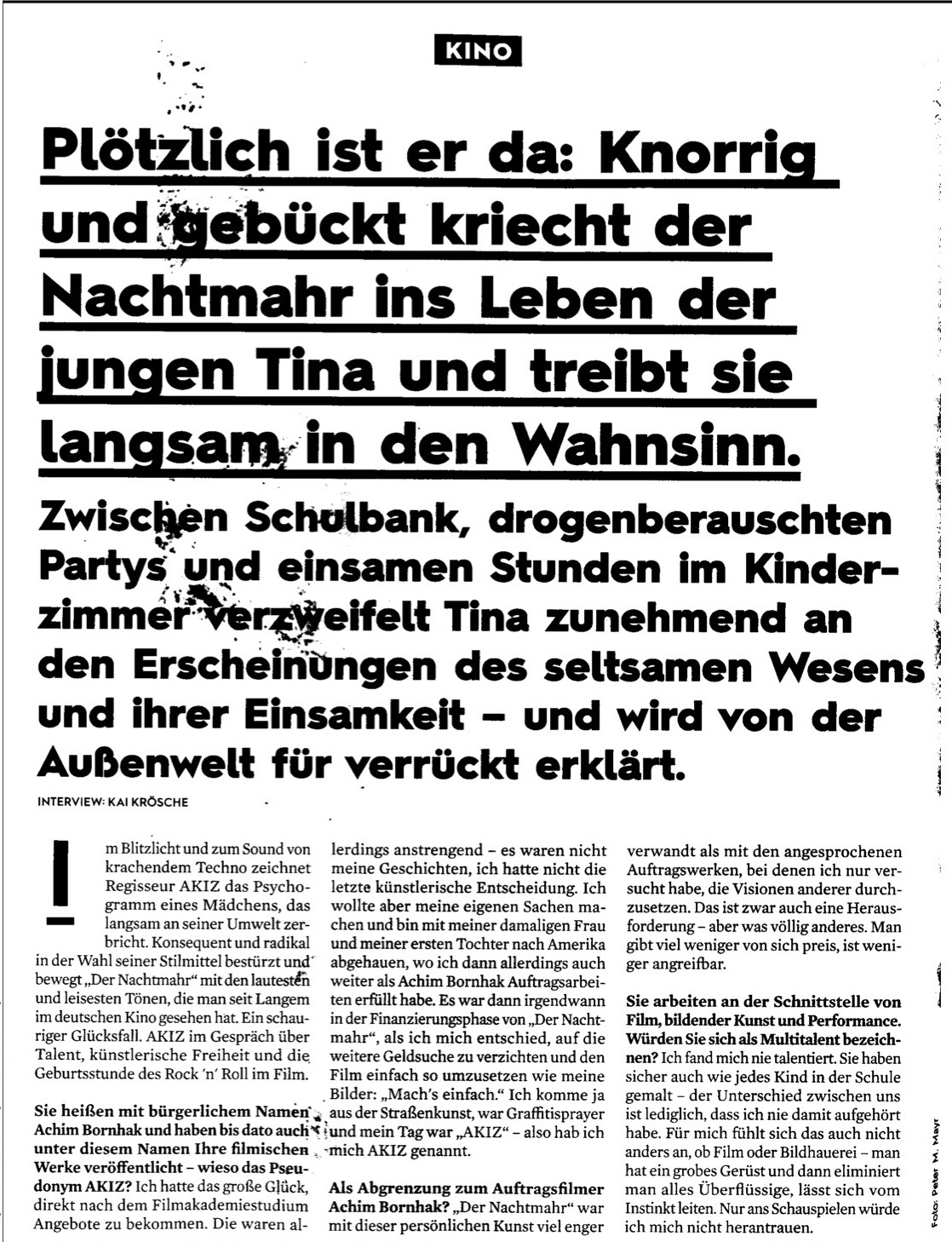