AKIZ studied at The Film Academy Baden-Wuerttemberg; two of his student films were nominated for Oscars. Later, he received a scholarship to attend grad school at the famed University of Southern California, which counts John Carpenter, Gregg Araki, Scott Derrickson, David Goyer, and some dude named George Lucas among its alumni.

AZIZ directed his acclaimed debut film Die Nacht der Nächte - School’s Out in 1997. In 2008, he helmed Eight Miles High (Das wilde Leben), which gives a “lusty, German twist” to the mythologizing of the 1960s and the life of groupie, model, and leftist icon, Uschi Obermaier.

Painting Reality, one of AKIZ’s short films, was featured in The Antic’s Road Show, a film about street art from none other than Banksy. It shows what happened when 500 liters of (non-toxic, environmentally friendly) paint were dumped on the streets of Berlin and spread around by cars. Meanwhile, as if all that weren’t enough, AKIZ was also working on paintings and sculptures, such as The Curious Case of Pikachu, in which 333 handcrafted “Pikachu fetuses” in jars of formaldehyde were placed in alcoves throughout a large hallway.

With all of this bizarre and beautiful art that AKIZ has created, we just had to find out more. 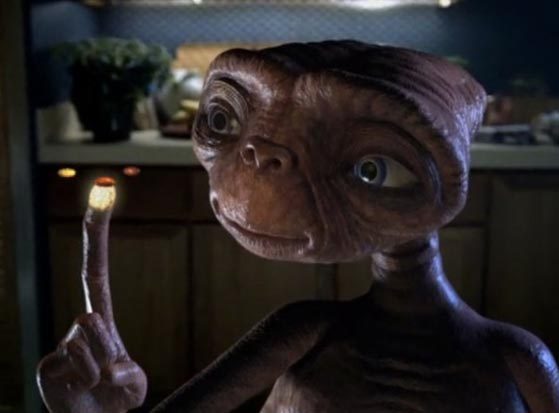 Your short film Evokation shows a creature that looks similar to the one in Der Nachtmahr. Can you explain if these two films are related thematically?

Well, first of all Evokation was some kind of test shooting. It’s the same creature. We were testing different ways of lightning and movements of the creature. I won a competition at the Soho House in Berlin. They gave me a little budget and the opportunity to shoot a little film about the topic “obsession.” At this point I had just finished the first model of the creature and was ready to do the first test.

Thematically, well I don’t really see a connection, besides the fact that at this point I seemed to be intrigued by the idea of women having an encounter with their daemons. In both films there is this female who has some kind of secret–something that seems to be very personal and obsessive at the same time. But in Evokation her relationship towards this daemon seems to be way more grown up or mature, more than in Der Nachtmahr.

This is one of various elements that somehow must have been triggered in my brain when I saw E.T. as a kid. In this case I am referring to the scene in E.T. when Elliott is feeding E.T. with peanuts to set up a connection between them. For me the funny thing is that I became aware of all the references in this film (like E.T.) AFTER the film was finished. I was not aware of all of that at all while I was working on this film. 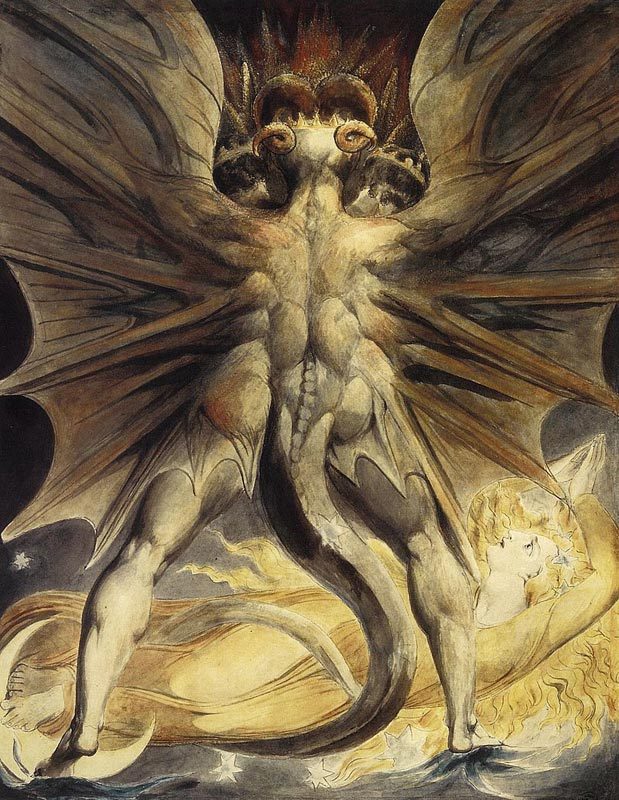 William Blake, The Great Red Dragon and the Woman Clothed in Sun

What filmmakers or other visual artists inspired the creature design in Der Nachtmahr? Are there any specific “body horror” movies that influenced you?

Not at all. First of all, I am not a fan of horror films. Actually, I haven’t even seen a lot of horror films in my life. And I haven’t even seen a single “body horror” film. I don’t even know what that exactly means. I was told Cronenberg is the master of “body horror,” but I don’t see this element in my favorite films of his like Crash, or eXistenZ, or Cosmopolis. I am a sculptor and painter and in the beginning, I had no intention to do a film but to just make a sculpture. My vision was a creature–like a mixture between a fetus and an extremely old man. Later on I thought it would be a great idea to use the creature in a film.

I don’t think Der Nachtmahr fits into the genre of horror films simply because a horror films require certain elements, most of all the fact that the audience should be afraid or should be uncertain if the main character will survive, for example. In Der Nachtmahr there is no single moment where I expect the audience to be “afraid.” It is pretty obvious that this daemon causes a lot of trouble in Tina’s life but at no point the audience is asking itself, “Will the creature eat her up?” For me the thrill is rather to see her wandering through this surreal inner landscape as well as watching her coming to terms with her self.

Anyway, I guess I was and still am heavily influenced by filmmakers like Tarkovsky, David Lynch, Gaspar Noe, Chris Cunningham, Jodorowsky, Luis Bunuel, The Brothers Quay (I still keep a signed VHS cassette as one of my most valuable treasures. The twins gave me a tape with their films in the early 1980s when I approached them at a film festival in Germany as a 15-year-old kid). And of course the grandmaster of film, Stanley Kubrick.

Speaking of role models and sources of inspiration from visual artists, there is Yves Klein, Max Ernst, and most of all, the greatest visionary of all time, William Blake. Also I was and most probably always will be a great fan of the great German expressionists of the 1920s in poetry like Trakl and Benn. 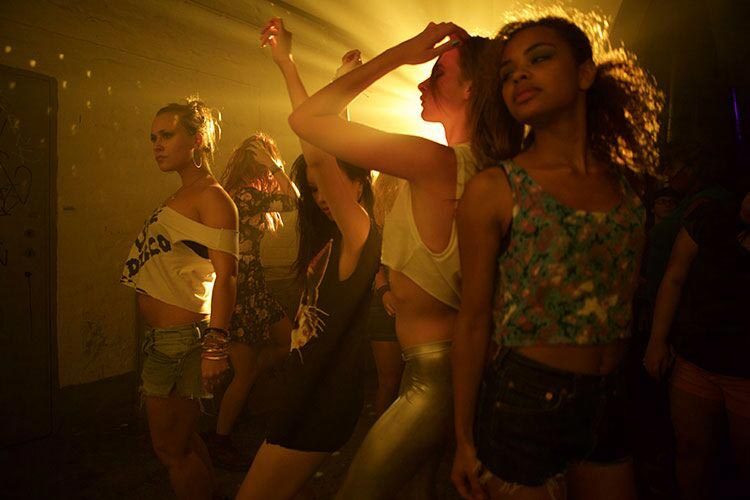 Music seems to be a large part of your cinematic endeavors. Do you look for musicians to complement the images or does the music help to inspire you to create certain kinds of images?

Both. I did the editing by myself and I put temp tracks in the timeline in a very early stage to get an idea about the structure and rhythm of the film. Some of these temp tracks ended up in the final mix. I edited the film at the same time as I edited the music. While we where shooting, we played different music to get the actors in the mood.

But to be honest, the music on location was not always as harsh and loud as it was in the film, simply because after several hours of shooting under strobe light conditions, hardcore electronic music can be kind of dangerous to people. One of my actresses was pregnant so I really felt responsible to not push the envelope too far.

To get back to your question: The music and score is a mash up of a lot of elements. Some parts have been composed by Steffen Kahles and Christoph Blaser according to my temp tracks. They also came up with music I was not expecting or music that was totally different from my temp tracks. I have composed other parts in the score and then there are tracks and songs that already existed before we even started to shoot the film. 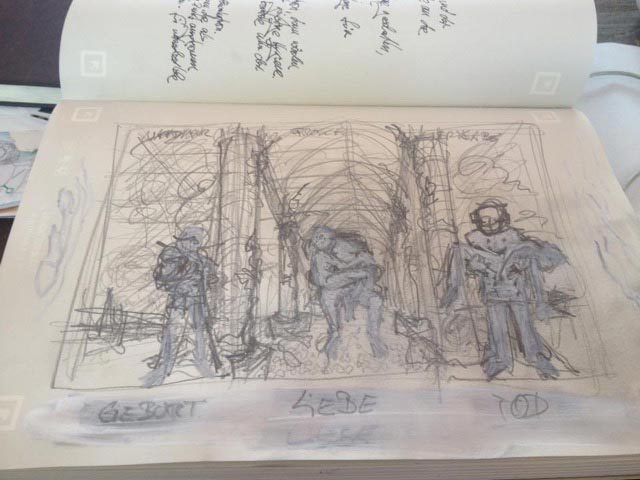 You’ve said that Der Nachtmahr is the first part of a “demonic trilogy.” What can we expect from the next two installments?

I call it the Daemonische Trilogie. All of my upcoming projects more or less deal with the same issue: An encounter with a daemon and its impact on society. This triptych deals with BIRTH, LOVE, and DEATH. Der Natchtmahr is the first part, Birth. Here the daemon appears for the first time, like a fetus, a speechless creature.

In the next one this daemon turns into a human being. It experiences love and hate. It feels what it is like to be human… and eventually becomes addicted to being human. This middle part of the triptych is more romantic than frightening, but at the same time its going to be a feverish, wild, hypnotic ride like Der Nachtmahr.

The third and last part deals with death. Now the daemon looks, behaves, and acts like a real human, but at the same time he impersonates some daemonic remnants, which turn society upside down. Basically this story is a modern version of the old Bible story about Cain and Abel, their jealousy, and the death of one of the two. This story takes place in the world of the high-class restaurant kitchen. This film deals with the hierarchy between the chefs - Jealousy, Ecstasy, and Decadence - but most of all this last film is about the death of the genius daemon. 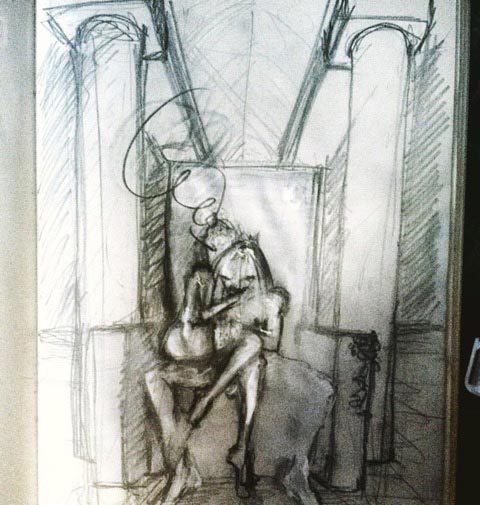 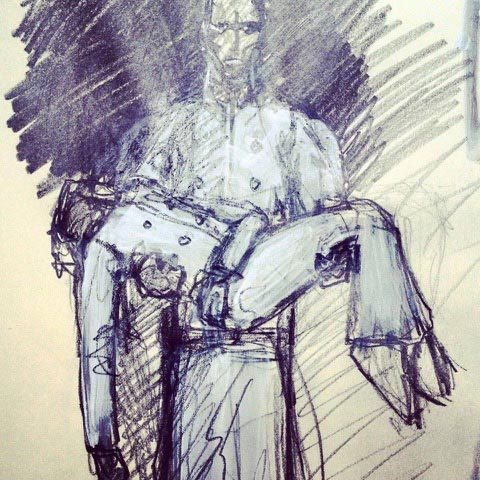 Actually I don’t have bad dreams. I dream a lot but these dreams are always wild, exiting and most of the time pleasant and joyful. Some of them even feel enlightening to me. The most frightening moment of my life was in my early twenties when I had a severe near- death experience. For almost 45 seconds I was flat lining. I think this experience had a huge impact on the story and the structure of Der Nachtmahr.

DAZED AND CONFUSED on "Der Nachtmahr"